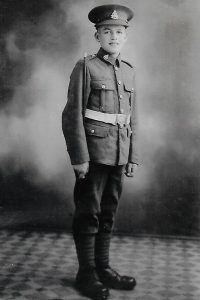 Arthur after 6 months at Hilsea 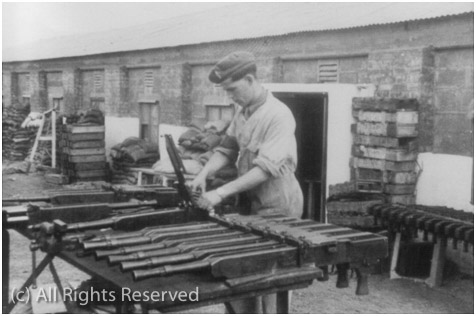 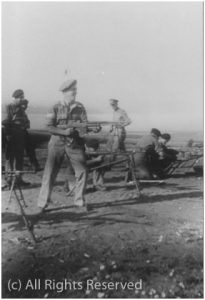 The 4/7 RDG were equipped with Cromwell tanks fitted with the BESA as a coaxial and Hull M.G. The boxes in the background are 75mm ammunition for the main armament.

Testing a Polish made 7.92mm Browning Automatic Rifle (Using 7.92mm BESA Ammunition) Captured from a Jewish Mobile Patrol that was shot up by the 4/7 RDG

The Churchill Crocodile, right, was a British flame-throwing tank developed during the Second World War.  It was a variant of the Tank, Infantry, Mk VI (A22) Churchill Mark VII, although the Churchill Mark IV was initially chosen to be the base vehicle.  The Crocodile was introduced as one of the specialised armoured vehicles developed under Major-General Percy Hobart, informally known as “Hobart’s Funnies”.  Production started in October 1943, in time for the Normandy invasion of 1944. 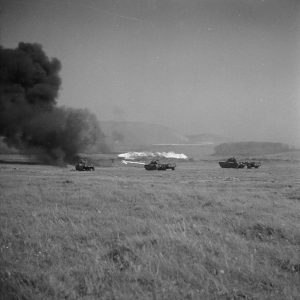 The WASP was based on a small, tracked, open-topped vehicle known as the Universal Carrier.  Initially mounting a Ronson flamethrower, the weapon was steadily improved so that a range of 80 to 100 yards (73 to 91 m) was achieved.

It is believed that the photo on the right showing the recovery of a light railway engine is from the Romney, Hythe and Dymchurch railway.

The recovery vehicle is from the Comd Wksp Ashford. 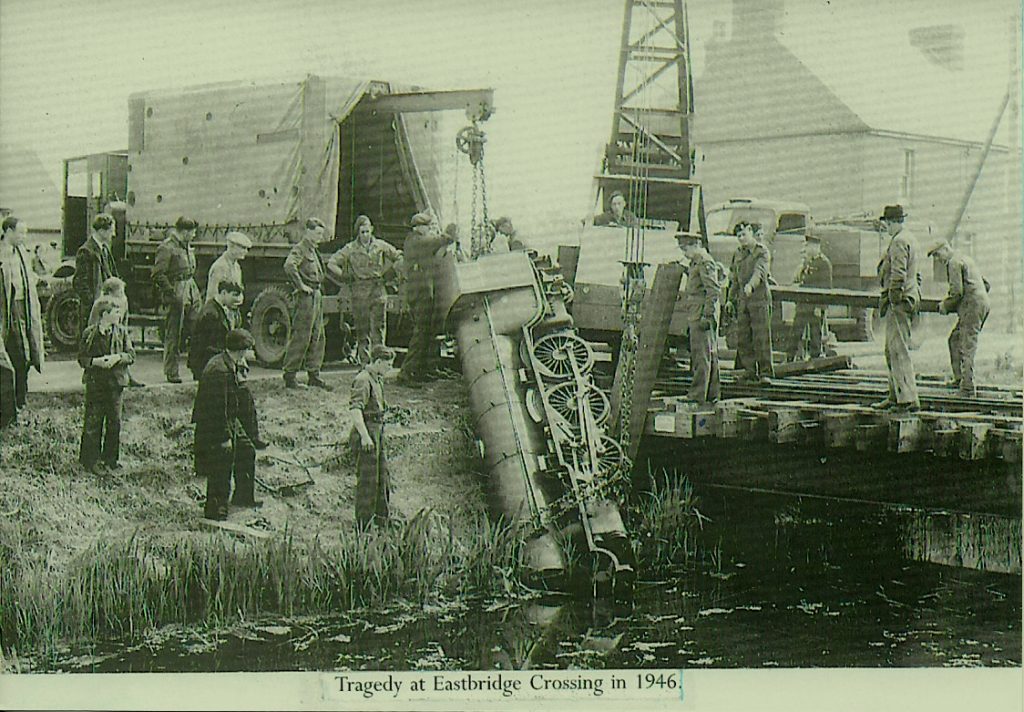 In 1940 the railway was taken over by the military during World War II, and a miniature armoured train was used on the line.  It was also used by the Department of Petroleum Warfare in the construction of PLUTO (“Pipe Line Under The Ocean”) intended to supply fuel to the Allied forces after the D-Day Normandy landings.  During the latter stages of the construction of PLUTO considerable damage was caused to the track on the extension when, to speed up the work, lengths of pipe were dragged along the trackbed by bulldozers, resulting in its reduction to a single track after the war.

The line re-opened between Hythe and New Romney in 1946, the New Romney to Dungeness section following with a formal opening by Laurel and Hardy on 21 March 1947.  Regular services started on 29 March 1947.

The Besa machine gun was a British version of the Czechoslovak ZB-53 air-cooled, belt-fed machine gun, which in the Czechoslovak army was marked as the TK vz. 37.  It was used extensively by the armed forces of United Kingdom during the Second World War, as a mounted machine gun for tanks and other armoured vehicles, to replace the heavier, water-cooled Vickers machine gun.  Although it required a rather large opening in the tank’s armour, it was dependable and reliable.  The name came from the Birmingham Small Arms Company (BSA), who signed an agreement with Československá zbrojovka to manufacture the gun in the UK.  The War Office ordered the weapon in 1938, and production began in 1939, after modifications.

The Vickers machine gun or Vickers gun is a name primarily used to refer to the water-cooled .303 British (7.7 mm) machine gun produced by Vickers Limited, originally for the British Army. The machine gun typically required a six to eight-man team to operate: one fired, one fed the ammunition, the rest helped to carry the weapon, its ammunition, and spare parts.  It was in service from before the First World War until the 1960s, with air-cooled versions of it on many Allied World War I fighter aircraft.

The weapon had a reputation for great solidity and reliability. In an action that took place in August 1916, the British 100th Company of the Machine Gun Corps fired their ten Vickers guns continuously for twelve hours. Using 100 barrels, they fired a million rounds without a failure. It was this absolute foolproof reliability which endeared the Vickers to every British soldier who ever fired one