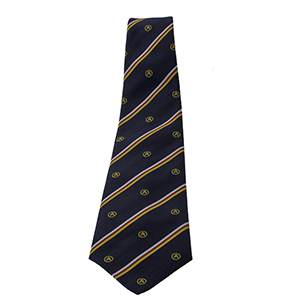 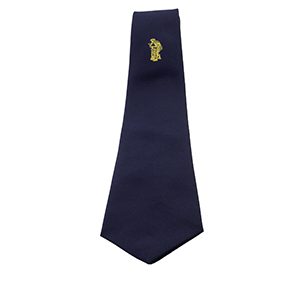 The Chairman, Lt Col Smith, undertook to investigate the project and to produce designs for members to examine at the next annual dinner.  Suggestions for the design of the tie were called for and received from Armourers in the UK, British Army of the Rhine, and in the Far East Most of the suggestions favoured a striped tie of a sporting design combining the colours of the Royal Army Ordnance Corps and the Royal Electrical and Mechanical Engineers, because of the associations with these two Corps.

The Chairman was aware, however, of the opposition met by a similar project where official Corps colours were involved, and considered it advisable to have a design which could not be confused with those of the two Corps.  Other suggestions favoured a more individualistic design, one which was complete distinctive from official patterns.  Upon giving the second suggestion some thought, the idea occurred of having a striped tie based on the colours of the Ancient City Guild of Armourers and Braziers with whom the Armourers had a link (The link is in the form of a handsome silver medal provided by this Company annually for presentation to the Armourer who accomplishes the most meritorious performance at the annual REME Bisley rifle meeting).

Investigations on the lines of this idea were then made.  The Armourers and Braziers Company had no objections to the use of their colours, but did not want any part in the project.  Their colours are black and silver with gold and puce embellishments. (See the Arms of the Company).  With help from REME Technical Services drawing office, various coloured designs were produced.  A black background was discarded as being too sombre and because black material invariably ‘rusted’.  Finally dark blue was chosen as a compromise.  Having decided on the background the next step was to introduce the other colours preferably, in stripes.   Again, after many trials, it was agreed that the gold, silver and puce should be in narrow stripes close together, and that they should run diagonally from right to left, each set of stripes to be about one and one half inches apart.  It was decided subsequently that puce should not be used.  Then to make the tie even more distinctive, it was decided to include the ancient Armourers’ hallmark which consisted of the letter ‘A’ in a circle, with nine dots on the inner periphery of the circle.  The hall-mark to be in gold and placed between the rows of stripes.  When this design had been completed in October 1956 it was shown to various members to obtain their views.  All agreed that the design was satisfactory.

Ledgett & Sons civil and military outfitters of Whitehall, London were given the task of manufacturing the ties.  Because the design had not been fully approved however they at first produced only a small piece of material with the design woven into it to be shown to the company at the next annual dinner.  The dots in the hall mark had unfortunately to be omitted because of difficulties in production.  The material, together with other designs on paper, were exhibited at the 1957 Annual Dinner for all the assembled company to see and vote on. Col Smith explained why official colours had not been used in the design, and how the design represented by the material, had been developed.

By an overwhelming majority the company voted for the latter design.  The only criticism being that the sets of stripes were rather too close together.  In the final design therefore the distance between the stripes was increased to two inches.

Messrs. Ledgett & Sons undertook to manufacture 144 ties to this design at seventeen shillings each.  In the first three years 360 ties were sold. Messrs. Sharps Freeman Ltd of Maidstone now (1981) manufacture the ties at a cost of £2.40.

“Extract from “The Armourers’ Association Handbook May 1982”