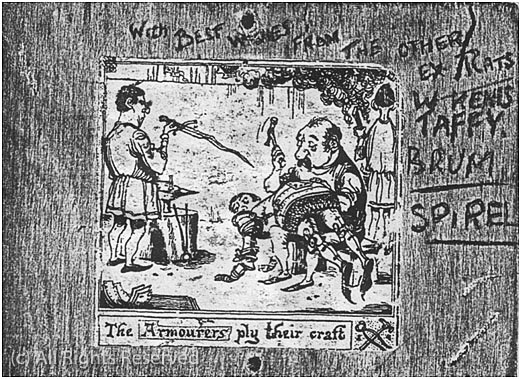 The Armourers Ply Their Craft

The above cartoon was found behind a workbench in Spey Barracks, Buxthude near Hamburg in 1955.  The Barracks were handed back to the German Army in 1957

The Armourer I well remember as a child in innocence and fun,
The sudden sombre interest found when looking at a gun,
A sight so rare in my young life, whatever is it for?
How sinister when it points at me with wide and gaping bore.

A quirk of fate then led me on when we found ourselves at war,
That caused me to spend many hours gazing through a bore.
For hand of chance and service to the country that I love,
Had fostered greater interest and given me a shove.

Towards a trade to follow for the rest of my sweet life,
“well someone’s got to do it” was the weak excuse to my dear wife,
“For firearms don’t grow on trees to be plucked as they’re desired”,
They are so carefully manufactured and adjusted ere they’re fired.

We ply our business silently without announcement, boast or fuss,
To support our comrade servicemen and their trust they put in us,
To keep them armed what ere the cost and to serve them in the field,
For we are soldiers also and (of course) would never yield.

For the ancient art of armoury by necessity must be done,
Although sinister in it’s purpose it involves us, everyone,
For man’s first thought was for defence of all that he holds dear,
Hence slingshot, bows and arrows, club and swords and hunting spear.

An Armourer’s life may sound very fine,
Attached to a regiment of the Line,
But little is known of the poor devil’s job,
When he’s attached to an infantry mob.

Many a task he has got to perform,
An electric iron that fails to get warm,
Is taken to bits by the small arms “Tiffy”,
Who has it fixed up in half a jiffy.

He’ll inspect a machine gun, file off the burrs,
Put a new rowel on the Adjutants spurs,
Do any job on a three inch mortar,
Or mend a flat tyre for the R.S.M.’s daughter.

He will clean out a rifle with rod and wet jute,
Or fit a new key to a ‘B’ flat flute,
The glass of a helio doesn’t reflect,
It’s taken to “Tiffy” for him to inspect.

He’ll solder a cap badge, paint the tin hats,
Construct a machine for catching the rats,
Grind up some scissors, or sharpen a knife,
Or repair a cake tin for the Colonel’s wife.

And so brother corpsmen (or he who supposes),
That an Armourer’s life is a mere bed of roses,
He’s a “Jack of all Trades” as you can see,
And a first class soldier he must also be.

This poem first appeared in a 1938 edition of the RAOC magazine. Tom McKenzie (Hilsea 1938) supplied an alternative final two lines:

A master of all trades he must certainly be,
But worse luck he’s only class “B”.

This harks back to the old system of banding trades by letters for pay purposes.