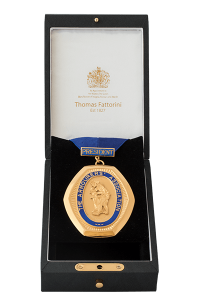 At the committee meeting in the Autumn of 1978 a proposal was made concerning the provision of a badge and chain of office for the President.  1978 was the year prior to our Silver Jubilee and it was felt that such a move would set a seal on the twenty-five years of the Association’s existence while at the same time expressing in tangible form the feeling that so many of the members had for the Association.  The proposal was carried.

The chairman undertook the task of making enquiries and subject to acceptance by the committee, putting the production of the badge in hand.  The firm of Messrs Fattorini of Birmingham who specialised in the manufacture of civic and other badges was approached for ideas.  From their brochure showing many examples of pendant badges, both ornate and simple, a modest design in keeping with our limited resources was chosen.  It was suggested by the President that the figure of The Armourer’ by Gaudex should form the subject of the central motif.  For this purpose the Master of the Armourers and Brasiers’ Company was kind enough to provide us with photographs of the statue.  From these a sketch of the suggested design was made and sent to the firm for an estimate.

In August 1979 the Chairman received from the firm a coloured representation of the proposed design.  It was an excellent interpretation of the ideas put forward and made a very attractive and impressive badge.  The cost with ribbon collarette and packed in a presentation case was £168-50 nett with delivery in sixteen to eighteen weeks.

During the ensuing period when the design was being considered a few suggestions for its improvement were made.  However at this time the Association (or Dinner Club as it was then) was considering a change of name it was obviously sensible to await the outcome before going firm on the design.  At our reunion in 1980 the new name of The Armourers’ Association’ was agreed and soon after the order for the badge was placed.  It was to be paid for by donations from members sent in response to an appeal made in our annual newsletter.

The finished badge was received on the 10th October 1980 and was excellent.  It was made of hall-marked silver gilt with the background of the lettering and central motif picked out in dark blue enamel.  The collarette was made of dark blue ribbon and on the reverse of the badge the name of the first holder of the office, Lt Col E F Smith, was engraved.  The cost had risen considerably during the period since the original estimate and the final cost, including engraving, VAT and postage was £283.88.

The Association now had a badge of some distinction and wanted the services of an eminent figure in the armourer’s world to be Guest of Honour at our next reunion and present the badge on behalf of the Association to the President.  We were fortunate that Mr Basil Chambers, the Master of the Armourers and Brasiers’ Company, who had been so helpful to us in producing the badge, was able and willing to fill this role.

The evening was a great success and although the occasion was not a formal dinner it had sufficient formality to give dignity to the occasion.  This was of course the first opportunity that many members had of seeing the finished item and comments were very favourable.  The feelings of the members had previously only been sounded out by the use of our news sheet and it was particularly gratifying to the committee that the tentative support received to set the project in motion was followed up by a wholehearted response to the appeal for money which brought in sufficient with a little to spare;  It is hoped that the badge will remain a symbol of the Association for many years to come and will be worn by many Presidents.

Extract from “The Armourers’ Association Handbook May 1982”